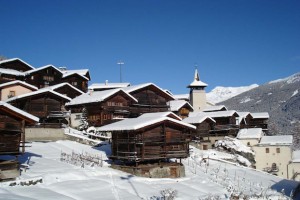 Grimentz, the charming village of the Val d’Anniviers with 430 inhabitants during the year which rises to about ~4’000 inhabitants in the weeks during peak season.

A typical mountain village which in spite of its development is still a best kept secret.

Its old village is one of the quietest and most beautiful hidden gems in the whole of Switzerland….

Niched in the Anniviers Valley, in the heart of the French speaking Canton of Valais, Zinal – base elevation 1’670 m – is surrounded by 5 spectacular peaks appropriately named the Imperial Crown, the most prominent of which, the lofty Weisshorn – 4th highest summit in Europe –, towers at an altitude of 4’506 m.

The resort will equally thrill sports buffs or families throughout all seasons.

Whether as a departure point for several hikes to its summits or as a pleasant halt for mountain lovers as well as visitors looking for a nice meal, Zinal with its frosted peaks and natural beauty is sure to enrichen everyone.